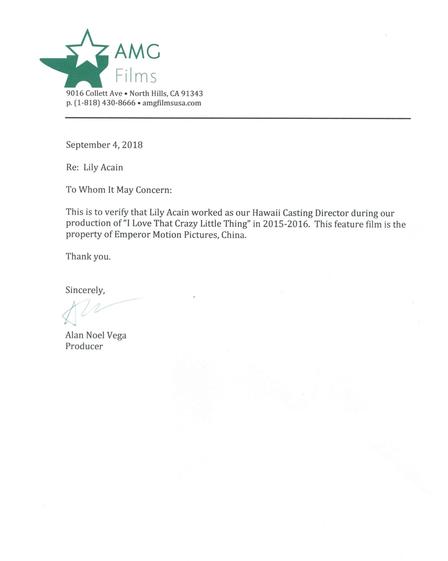 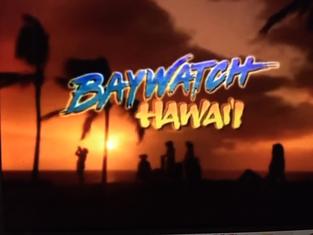 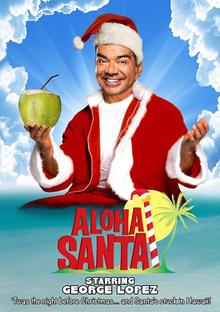 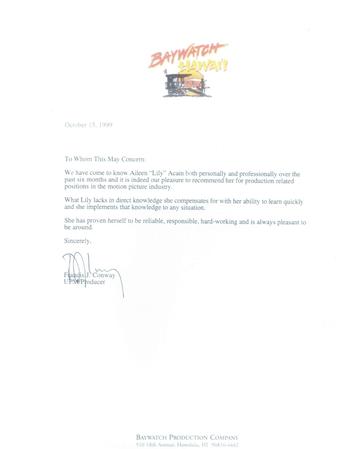 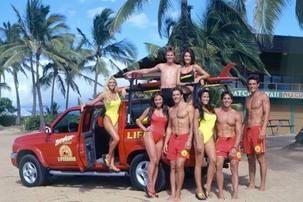 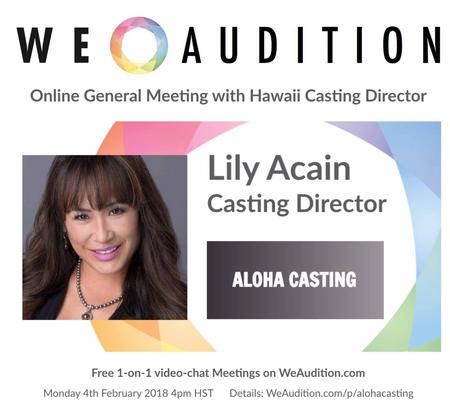 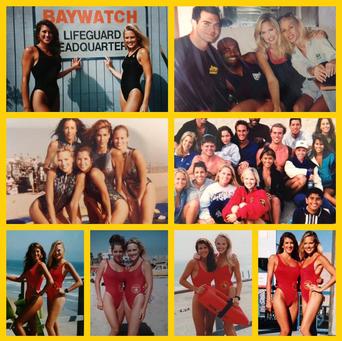 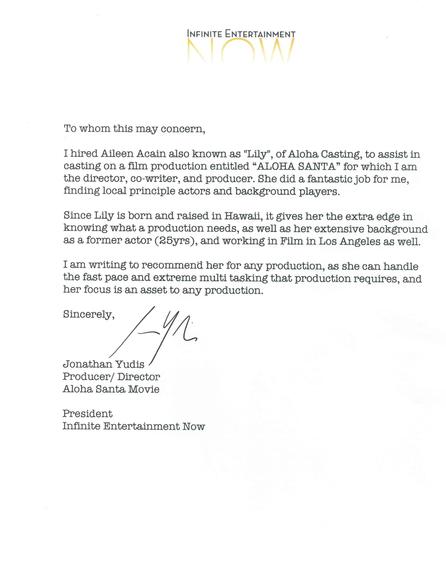 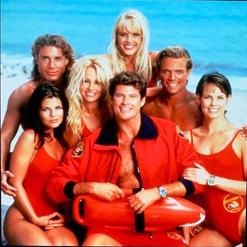 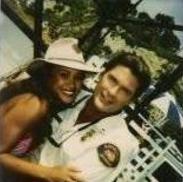 website, as she just completed their Film Makers Directors Course, and Editing.  September 2014 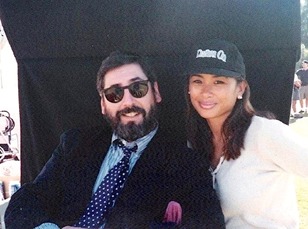 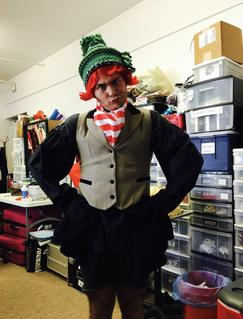 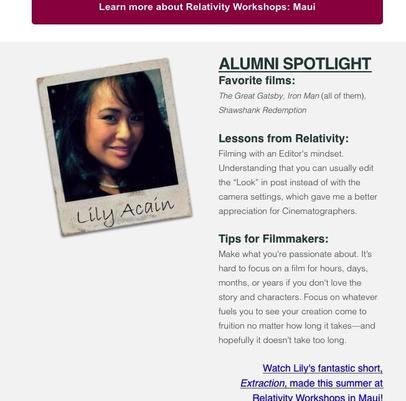 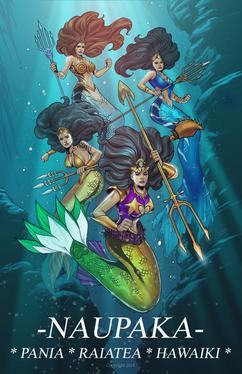 With Margaret Doversola who had started casting me as a teenager on the original Magnum PI, and stunts on Jake and The Fatman, along with all other tv series and feature films that were filming in Hawaii. Worked with her on Baywatch Hawaii assisting in Background casting 1999. 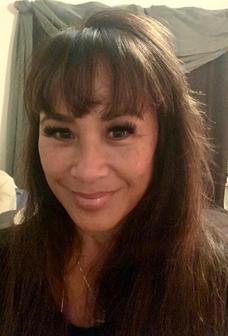 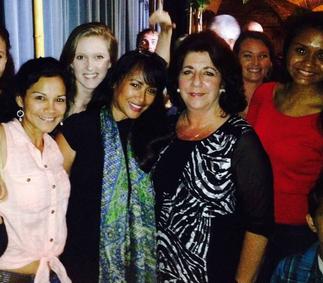 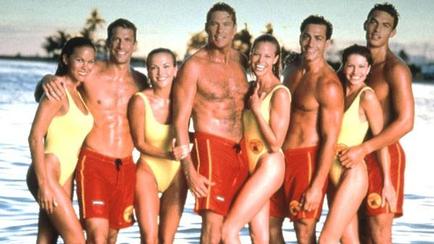 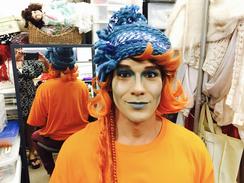 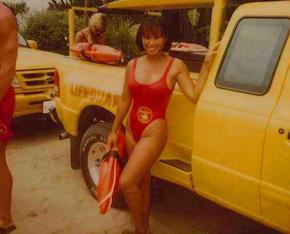 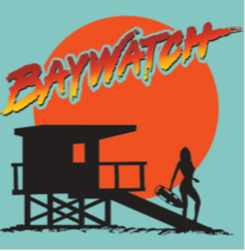 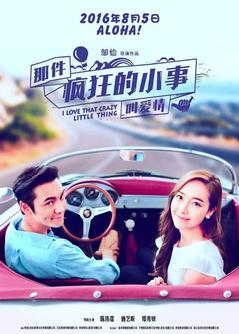 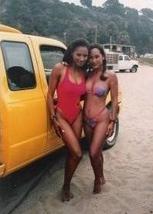 Sitting with some of our Baywatch California Background Regular Lifeguards and Extras. 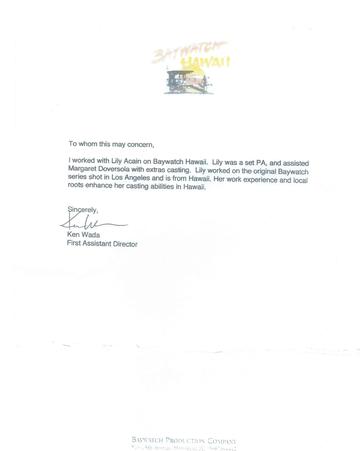 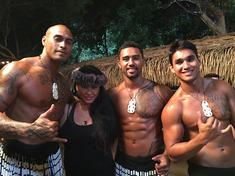 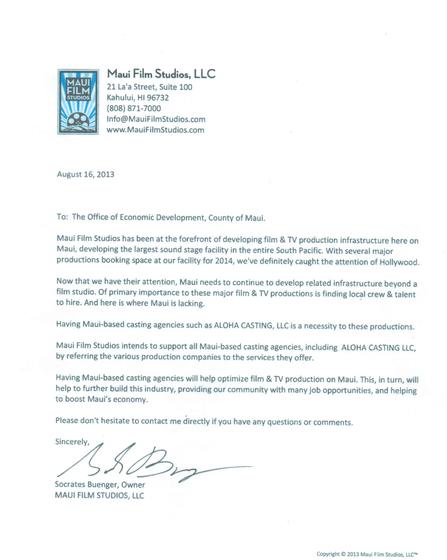 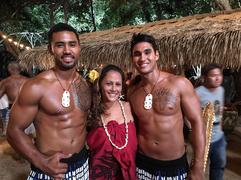 Born and raised in Honolulu, Hawaii birth name Aileen Acain, but had been called "Lily" since her childhood years.

She started her career in the industry as an EXTRA on a season opener of “CHARLIES ANGELS-Episode “ANGELS IN PARADISE” in her early teens. Introduced by stunt friend Reggie Ho, as a “SURFER GIRL” surfing in Waikiki, then as a “MURDERWITNESS” and “STUDENT” for a week. Getting paid $20 in cash at the end of each day out of a School Bus parked next to the school field for this teen was allot of money back then, which then she was bitten by that "BUG" for the Film Industry. Her older siblings were a couple of the ONLY 22 EXTRAS that were working in the entire State of Hawaii at that time for the original HAWAII 5-O TV Show, since she and her family lived across from DAIMOND HEAD STUDIOS in Kahala off of 22nd Avenue.

They introduced her to Casting Director Margaret Doversola and she started to work on MAGNUM PI as an EXTRA at 18 yrs. old for 7 years. She eventually landed her first speaking role on “JAKE AND THE FATMAN” in 1986. After joining SAG, and then landing a 3 yr. Contract with BANK OF HAWAII (MYRA & HARRY Story) with her then Agent AMOS KOTOMORI who had launched her into becoming one of Hawaii’s top Actors, along with modeling, and Stunts,on TV Shows such as “ONE WEST WAIKIKI” starring alongside CHERYL LADD as “PUA ALO”, “RAVEN” with JEFFREY MEEK as his “BONSAI GARDNER, “MARKER” with RICHARD GRIECO, “ISLAND SON” with RICHARD CHAMBERLAIN doing stunts on “JAKE & THE FATMAN”, Feature Film “NORTH”, “WATERWORLD”, and other television Pilots  and movies that would shoot in Honolulu or on the neighboring islands throughout the years.

After landing a female Detective role as part of an ensemble cast for a Pilot called “CHOP COP” Directed by JOHN LANDIS. Unfortunately the Pilot did not get picked up, so LANDIS had taken her under his wing to help develop her as an Actor along side his stable of Actors in LA. Lily had disclosed her aspirations of becoming a Director after attending Leeward Community College’s TV Production program taught by ROBERT HOCHSTEIN, which inspired LANDIS to mentor her after she moved to California. Giving her small roles such as in “BEVERLY HILLS COP III" with EDDIE MURPHY. She flew back and forth to Los Angeles auditioning and working on shows she landed such as on “DREAM ON”, and reading for a Lead role in STEVEN BOCHCO’s “BIRDS OF PARADISE” starring TIMOTHY BUSSFIELD, ELIZABETH LINDSEY,SETH GREEN, & JENNIFER LOVE HEWIT.

Lily had lived abroad in Mexico, Cancun, New York, Florida,Texas, & Miami where she was up for the part of the “GIRLFRIEND” in “GOOD MORNING VIETNAM” with ROBIN WILLIAMS, then moved to North Carolina, where she landed a role as a “JOURNALIST” in “BLUE VELVET” with DENNIS HOPPER, ISSABELLA ROSALINI, KYLE MCLAUGHLIN, & LAURA DERN, filmed in DINO DE LAURENTIIS STUDIOS in Wilmington, but that role ended on the cutting room floor. She then moved back to Hawaii.

A  call from Casting Director JACKIE BURCH encouraging her to move to LA so she can read her for more projects daily instead of 3 or 4 times a year. Lily did just that. Moving in 1994, she immediately landed on “BAYWATCH”, after being picked out of the new registration line up at CENTRAL CASTING by senior Casting Director "JJ" (James Jue), she then became one of their Utility Stunt People after a couple seasons and transitioning to behind the camera as a PA (Production Assistant, then AD (Assistant Director)moving with the Production Company to Hawaii with “BAYWATCH HAWAII” in their 10th season eventually. While in LA, she went on to becoming a regular on series such as BEVERLY HILLS 90210, MELROSE PLACE, POWER RANGERS, JAG, RENEGADE, HITS,BABYLON 5, BATTLESTAR GALLACITCA, STAR TREK -THE NEW GENERATION, JAMIE FOX SHOW, FRESH PRINCE OF BEL AIRE, IN THE HOUSE, URKEL, and many more shows along with being a Utility Stand In on John Landis’s TV Series “CAMPUS COPS” where he continued to Mentor her in Directing, and had introduced her to his Comedian Actor friends DAN AYKROYD, ROB SCHNEIDER, and other cast members of SNL that worked on his projects. He continued to help getting her booked on other projects of his friends. Introducing her to Casting Director ROBERT ULRICH besides JACKIE BURCH and eventually she became known auditioning for ROGER MUSSENDEN regularly. Signed on with ALLIED ARTIST MANAGEMENT , and SUSAN NATHE & ASSOCIATES representing her. Lily became known as a professional and good actress and was referred to acting Coaches LARRY MOSS and MICHELLE DANNER by senior writer close friend JOHN F. SMITH of THE BOLD & THE BEAUTIFUL, which she was considered to be an ongoing character "KIM" after one episode.

Along with attending Larry and Michelle’s school on 4th Street Promenade in Santa Monica, she had studied with JASON SCOTT LEE’s instructor SAL ROMEO, and with BOBBY CHANCE as well. Lily had continued working as an EXTRA, and Stunt person, on “RUSH HOUR” with JACKIE CHAN, and “ARMEGGEDON”, and a multitude of  films and TV shows until she interned as a Producer at one of Los Angeles’s top Film Industry Advertising and Marketing Companies ASPECT RATIO.  Attending VIDEO SYMPHONY'S -AVID Editing classes, and had starred in a Pilot  “THE AQUA GIRLS” as “BENJAMIN” that was created by Executive Producer Claudia Carey, and her Director/Producer/DP husband Yoram Astrakhan. The show was picked up by NIKOLODEON for 4 months.

After 8 years in Los Angeles, Lily moved back to Hawaii in 2002, and now resides on Maui , where she has assisted in casting on several projects, and continues to pioneer the Film Industry on Maui lending her 30+ years of experience and is known as one of Maui's Leading Film Industry Consultants.